Pico Laser Tattoo Removal- Not All Picosecond Lasers Are The Same!

You might have heard terms like Nano or Picosecond or even IPL and possibly wondered what it all means? It’s all to do with the pulse duration. The ‘fraction of a second’ that the machine delivers the pulse of laser energy is what makes picosecond lasers differ from nanosecond lasers and IPL. When it comes to pico laser tattoo removal, not all picosecond lasers are the same.

IPL or Intense Pulse Laser is predominantly used in the cosmetic industry, commonly for hair removal, and is useful in that application as it has a long pulse duration that generates heat to destroy the hair follicle.  Long pulses generate heat and in doing so, will burn the skin if not careful. This includes tattoos, making it totally unsuitable for laser tattoo removal treatment. Additionally, the penetration is not deep enough to target where the ink lies within the dermis.

Therefore a typical picosecond laser’s pulse duration is 100 x shorter than that of a nanosecond machine.

Why Is Pulse Speed So Important?

With Laser Tattoo removal, we need the pulse to be lightning fast, the faster the pulse the better the desired result.

By delivering the energy in such a short pulse, such as with Nano, or even faster with Pico, allows the ink molecule to shatter without harming the surrounding skin. Due to this speed, a Photo-Acoustic Effect is created not a heat generated effect, further destroying the ink particles and keeping the skin and hair follicles intact without any nasty effects of heat.

Nano Lasers are fine and do a great job at what they were designed for and if they are of the highest standard will do a remarkable job. Pico Lasers such as the Discovery Pico in comparison are like a car with extra gears, it enables it to deliver higher power more efficiently.

But not all Picoseconds are the same …

It’s one thing to have a lightning fast pulse count, but it’s also critically important to have the power to go with it. Some lasers, whilst being able to deliver a pulse in the picosecond range, either don’t have the correct wavelength or the power to be truly effective in all colour tattoo removal. They might be marketed as a picosecond laser but will operate within the nanosecond range due to this lack of power.

Wavelength and energy are equally as important as the pulse speed. Some Q-switched lasers and Picosecond lasers have different wavelengths which are used to treat different ink colours. Tattoo removal relies on the ability of a particular ink pigment to strongly absorb the appropriate laser wavelength. The two main wavelengths found in the most common Q-switched and Pico machines are the 1064nm and 532nm Nd:YAG laser.

Some lasers including Pico branded lasers have dye handpieces that simulate wavelengths (not true lasers). This severely reduces the energy of the laser which results in insufficient power to get deep into the dermis and shatter the pigment time and time again. With any laser used for tattoo removal it is important to not only have short pulse duration and the effective wavelengths, but consistent high power delivery to be able to penetrate to the deeper levels, not just the skin surface. Many Asian made lasers that have flooded our markets are lacking in these details.

The Picosecond pulses of the Quanta Discovery Pico Plus instead of Nanosecond pulses, enables the Pico to direct the same amount of energy in shorter times causing a greater photo-acoustic effect for better ink particle fragmentation. Remember, the thunder!

By having the highest peak power for any laser machine on the market allows for less energy to be delivered (even safer) whilst still achieving great results. 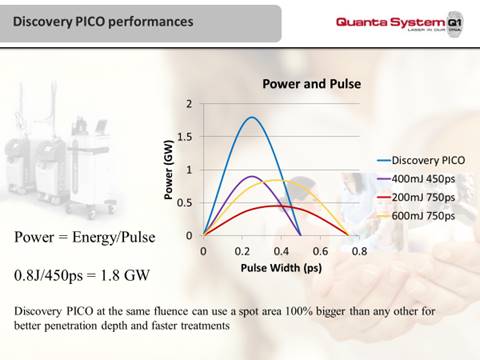 Nano and low power Picosecond machines require higher energy to be delivered to the skin to create a good response. If the laser technician or clinician are not careful then hyperpigmentation can result with these machines. Higher energy required to counteract the low power does generate more heat even though still photoacoustic due to friction caused.  This has the potential to disrupt the melanocyte of dark, particularly Asian skin causing this hyperpigmentation.

The Discovery Pico Plus is the gold standard machine for top Korean, Japanese and Taiwanese Dermatologists due to this very fact with little to no reported cases of Hyperpigmentation.

There is a big plus with having the highest peak power on the market. Less energy is required to achieve the same result and less energy means less pain.

All Hail The Italians

Quanta Systems have been developing laser technology since 1985 and specifically for medical aesthetics since 1997.

The Quanta Q Nano laser has long been regarded as the gold standard in Lasers for tattoo removal, now Quanta have introduced the new gold standard, the Discovery Pico Plus lasers with the three true laser wavelengths of 1064, 532 and 694 (no dye handpieces) required for targeting all tattoo colours, and power to safely reach ink trapped deep in the skin. The square spot size, unlike many other aesthetic lasers, enables no potential damaging overlap and no gaps.

The Discovery Pico Plus laser ensures the highest level of care for your skin and the best possible tattoo clearance each and every time.

It’s Our Machine. We are Gold Standard All The Way

Relove the Skin You’re In

Be careful where you go to have your tattoo removed!

Dr Catherine MacInnes, Renude Laser Clinic Director, covers all the things you need to know about the different laser machines presently being used for laser tattoo removal, including the different variations of Q-switched and Pico lasers. You will also understand why some companies who claim they can completely remove all tattoo colours are telling furfies because from a scientific perspective. The technology they use cannot possibly do the job. END_OF_DOCUMENT_TOKEN_TO_BE_REPLACED

Pain Free Tattoo Removal ! – Now at Renude Laser Pain free tattoo removal for all skin types sounds exciting doesn’t it! Tattoo removal is a pretty special experience, unlike any other sensation really and actually not that pretty!  Renude Laser has always been at the forefront of research for helping limit pain by not […]

Combining a red and green smoothie into one helps both lymph cleansing (red) and detoxifying toxic metals (green) and with the addition of collagen powder (joint, skin and gut strength) makes it “The Ultimate Smoothie”. With both liver cleansing and lymph cleansing properties whilst  also providing very important antioxidants for cell protection and reducing inflammation […]

Collagen – Anti-Ageing, Healing, Joint Protection Do you want fewer wrinkles, better joints and faster healing from injury? Collagen might be what you need. It is the glue that holds the body together and sadly, it declines with age. Collagen, the most abundant protein in our body, is an essential protein found naturally, and is the […]