Drinking bone broth made from grass fed beef or made from free range chicken bones and vegetables can benefit your skin, heart, muscles, joints, and gut health. We have transitioned over time into eating lean meat instead of things like oxtail and shanks thereby limiting greatly any collagen in our diet, and it’s time to introduce it again, just like our grandparents would have.

Bone broth has a wide array of nutrients that are difficult to find in any other food source. In a book, Gut and Psychology Syndrome: Natural Treatment for Autism, Dyspraxia, A.D.D., Dyslexia, A.D.H.D., Depression, Schizophrenia by Dr. Natasha Campbell-McBride, bone and meat stock  are  the foundation of the GAPS protocol because of its ability to heal and seal the gut lining and reduce overgrowth of harmful microbes. Broth made from chicken bones may also reduce the migration of immune cells during sickness. Bones contain an abundance of minerals, as well as numerous amino acids, many of which are found in bone broth as proteins like collagen and gelatin. When collagen is simmered, it forms gelatin. This hydrolysis of collagen results in the breakdown of long collagen protein fibrils into smaller protein peptides. However, its chemical composition is very similar to its parent molecule, collagen. Think beautiful skin and healthy joints! Many would use bone broth to recover from spinal injuries and joint damage. The cells in the colon need glycine, one of the largest components of bone broth.  Digestion, detoxification, liver function, kidney health, eye health, brain health, immune functions are some of the processes that can benefit.

If the connective tissue, such as tendons, ligaments, and cartilage, is still attached, the bones in broth will provide our bodies with raw materials for skin, bone, and cartilage formation, including: Keratin, Chondroitin and Hyaluronic acid.

In Greece, beaten eggs mixed with lemon are commonly added to chicken broth as a traditional remedy for colds and digestive upset.  In Vietnam, with a little star anise, beef bone marrow is used as the base for making beef bone broth such as Pho. India, Poland, Hungary and other countries have been using broth for centuries. Chicken soup in Israel called “Jewish penicillin” is used to treat and prevent illness.

So get brothing. It’s a great idea to freeze your chicken carcasses or lamb bones after a roast dinner and use when you are ready. Fish heads and prawn heads can also be used.

6 sprigs of thyme and rosemary

1 garlic bulb cut in half horizontally

Place slow cooker lid on and leave on low for 24 hours. Add more water if necessary to keep the bones covered. The longer it is cooked, the more gelatinous it will become.

Strain into a large container, cover and place in the fridge so the fat rises and congeals. Remove the fat and reserve for cooking (in the fridge for 1 week or frozen for 3 months). I freeze my broth in different size jars and add it in all sorts of dishes including the kids bolognese.  Broth can be kept in the fridge for 3-4 days.

For the time poor, we can order powdered organic bone broth in for you. 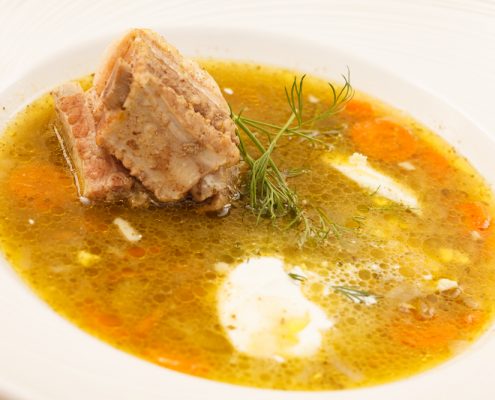 I had the ultimate facial package, to remove the pigmentation on my face, open pores and uneven skin tone. I had previously tried skin needling, but the progress was slow.

Since having the ultimate facial from Renude Laser, my pigmentation has completely gone, my open pores have disappeared and my overall skin tone has dramatically improved.

If you want fast results, save your money on monthly skin needling, expensive face serums and get this procedure!

The package includes three laser facials, with a complimentary microdermbrasion facial, two weeks post laser. The procedure itself is slightly uncomfortable, a feeling of a, hot sensation and I would recommend you use the highest numbing cream from the start. The healing time, is extremely fast. I would say the only annoying part, is your face will be red for four days, but by day five your face is back to normal, with very little skin peeling.
Catherine is amazing! She always checks in on you after your procedure via sms.

I am also in the process of getting two tattoos removed, I have had about 5 sessions so far. Very happy with the progress.

I have been to several laser tattoo removal clinics, and Renude at Lane Cove is by far the best. Dr Catherine Mcinnes is extremely knowledgeable and always has the latest industry tech...highly recommended

Read All 36 Reviews
Pico Laser Tattoo Removal: Not All Picosecond Lasers Are The Same!