Here at Renude Laser, we have recently treated quite a few clients for the removal of Southern Cross tattoos.

It has long been part of our sky, well before we set foot on this continent, but for many Australians, the Southern Cross has been a powerful representation of National pride. What then has changed in the last few years?

Warwick Thornton’s irreverent and intelligent documentary called “You Are Here, We Don’t Need a Map” recently aired on SBS. In this documentary, indigenous elders, rappers, aboriginal educators and a tattoo artist were interviewed regarding their thoughts and feelings of the Southern Cross as a symbol. Warwick himself, prior to the release of this documentary, found himself in a little hot water after comparing The Southern Cross to the swastika.

The Southern Cross as a symbol began with the miners uprising against the Government near Ballarat, at the Eureka Stockade in 1854. The flag for many represented a “fair go”. Realistically, not only did it symbolise unity for many, but also division. The Aboriginal people and the Chinese immigrants who worked at  the mines were often persecuted. Did it therefore represent white bodied male hierarchy? Is that what it signifies to many now? As Omar Musa queried in the documentary, it it ‘narrowing of an identity”where it is representing for people to “choose a side”.

To the indigenous people of our country, the blue sky is considered The Throne of The Universe and holds many stories for their people of the creation theory. The Southern Cross itself is an Emu’s footprint. The whole of the sky is therefore of great significance, not just this small part. Everything that has been told is there, according to an elder in the documentary.

The Southern Cross flag became a prominent feature during the Cronulla Riots in 2005. The division became greater this time between the white male and the Lebanese community and many people, once advocates of the symbol, are now uncomfortable with connotations of exclusion and racism it now evokes.

Is it our lack of identity and culture that has caused some to grasp on to this in the past, looking for a connection to Australia that other people don’t have?

This very small part of the universe is not even exclusively ours. The Southern Cross can be seen anywhere on Earth south of about 25 ° N, which includes southern Florida and Texas, South Africa, most of India, including the Maldives, and all of Australia. Perhaps something to consider if we eventually decide to change the Australian Flag.

People do change, and times have changed. maybe identity should not be represented in symbolism but in an action instead? 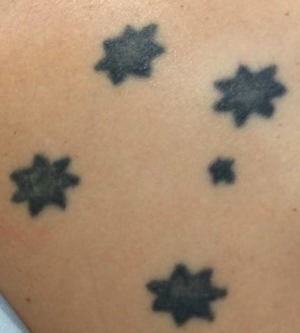 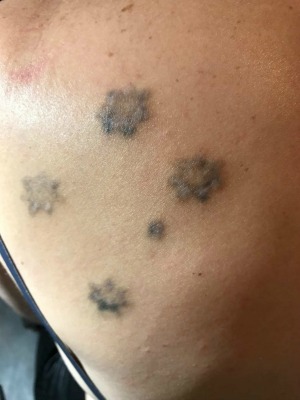 This deep ink tattoo has had 5 treatments.

The Southern Cross feature tattoo has had only 3 laser tattoo removal treatments in the above image.

Read All 39 Reviews
How Many Sessions Does It Take To Remove A Tattoo?