Or is it just good marketing?

The simple answer is NO, tattoo removal creams do not work.

Using creams for tattoo removal can be tempting, given that they initially look like they cost much less than the cost and commitment that is required compared to laser tattoo removal using advanced tattoo removal technology like a Q- switched laser for removal.

Tattoo removal creams are heavily marketed on websites and they can be purchased online bypassing our local Therapeutic Goods Administration (TGA) regulation.  This means there are no checks on the efficacy of the product or the safety of the ingredients.  Some products are pure snake oil!

According to the American Federal Drugs and Administration dermatologist Dr Markham Luke M.D:

“The FDA has not approved them, and is not aware of any clinical evidence that they work“.

Whatever their origin, it would be more accurate to call these creams tattoo-fading treatments since, according to dermatologists, they can only lighten a tattoo at best and then only with repeated use.

The creams use harsh chemicals to bleach the top layer of skin, the epidermis, changing pigmentation here the same way a chemical peel or skin bleaching system can.

The better these creams lighten, the more you should worry.

To be effective at fading, tattoo removal creams need to contain chemicals that produce an intense reaction to have any reasonable efficacy. Ingredients such as Trichloroacetic Acid (TCA) can severely burn and inflame the skin, causing a painful wound that could then be prone to infection and potentially damaging the skin.

As one dermatologist at the well-respected Mayo Clinic in the US puts it, “if you’re interested in tattoo removal, do not attempt it on your own.”

A few years ago, some plastic surgeons were so dismayed at the extensive burning caused by the use of Trichloroacetic Acid purchased from an unregulated website by a guy who desperately wanted his tattoos removed, they wrote a letter on the Dangers of Do-It-Yourself Tattoo Removal.

See the images of his traumatic experience below.

Top layer of skin was eaten away by the acid contained in the tattoo removal cream.

More tattoo removal cream ingredients to be wary of…

Another ingredient that has and is being used in some so called tattoo removal creams is one named Eflornithine. This was originally launched for cancer treatment however was instead found to be very effective at reducing unwanted facial hair in women (medically known as hirsutism) often from a hormone imbalance or familial trait.

This ingredient works by reducing a specific enzyme involved in hair growth and consequently has no effect on tattoos.

Hydroquinone is another ingredient found in some creams.

This chemical lightens the skin by inhibiting the production of melanin, a pigment that gives skin a brown color, according to Drugs.com. It is typically used to reduce the appearance of age spots, freckles and other darkened skin areas. This chemical may worsen dry, chapped or wind-burned skin, and should not be used by people with liver or kidney disease.

But it is also used as a developing agent in black and white photography and x-ray films and is banned in some European countries due to its potential negative effects on human health. It has been detected in cigarette smoke and in diesel engine exhaust. Long term exposure to it’s dust can result in eye irritation and impaired vision. No evidence is yet available on the cancer causing effects on humans, however, increased skin cancer incidence has been reported in mice when applied to their skin. Why would you want to put this in or on your body?

Kojic Acid, Lemongrass and Arbutin are also used in tattoo removal creams, acting as a skin lightener. Interestingly, the nut shell oil of cashews is also known to blister the skin on contact. Cashew farmers and those involved in the shelling of  cashews are known to use a protective tar on their skin whilst processing. Cashew nut oil is used for brake linings and as a blister treatment for warts and corns.

To fade or remove a tattoo, your best and safest option is laser

According to Dr Lawrence.E. Gibson M.D from the Mayo Clinic, considered the best diagnostic clinic in the world “There’s no evidence that tattoo removal creams work”. 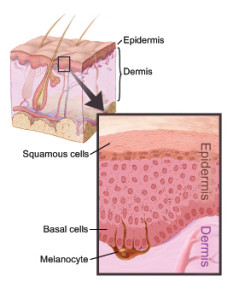 Note that the epidermis is quite shallow compared to the dermis which is where most of the ink from tattoo’s sit.

Due to the potential for serious side effects including skin cancer, burning and scarring of skin as mentioned by the experts, and as well as spending a lot of money on creams that have demonstrated no evidence of effective usefulness, tattoo creams are best to be avoided.

Caution – don’t believe everything you read about tattoo removal creams

Although these tattoo removal creams have good reviews on “independent” websites, we have found that these review websites are often owned by the tattoo removal cream companies or their affiliates (people who get a commission from sales or driving traffic to the product website) and are a way of making you believe that they work very well, when this is NOT the case.

Containing natural ingredients is great, (we are all for that) but it still doesn’t solve the fundamental problem (and scientific fact) that tattoo removal creams have: they are not able actually get below the epidermis layer of the skin and break up the ink pigments located at the dermis layer.

We DO NOT recommend tattoo removal creams as an effective method of permanently removing a tattoo from your body.

You deserve the best

Renude Laser Tattoo Removal has implemented the latest advances in science and technology to offer tattoo removal that is safer, healthier and faster.

As well as incorporating the gold standard in tattoo removal, the Q-switched laser (read more about Laser Tattoo Removal Machines), we use an additional Low Level Laser during pre and post treatment for greatly improved skin healing and repair, pain reduction, and better ink movement.

If you would like to remove your tattoo in a safe and effective manner, please complete our online inquiry form.

ReLove the Skin You’re In.

Read All 39 Reviews
Fade Away! The Best Way To Fade A Tattoo