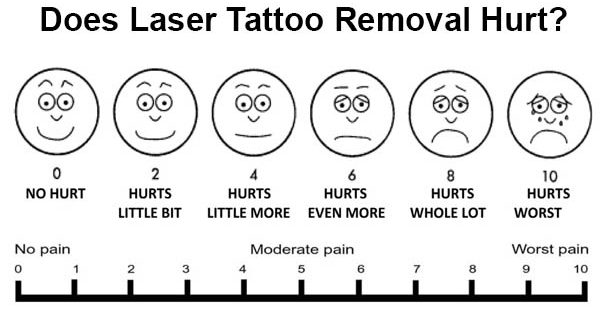 If you have identified a tattoo on your body you wish really wasn’t there, you probably have a few questions. Among them might be:

• How much does it cost?
• How long will it take to remove?
• Will it get rid of the tattoo completely?
• Will it leave any scars?

• Will getting my tattoo removed really hurt?

Before we get around to answering it (based on real data from customers), it’s important to note that if you really want to effectively remove that tattoo, there is only one viable option: laser tattoo removal.

You may have heard that there are other options, like tattoo removal creams, dermabrasion and even excision. But for a range of reasons, let’s take the short cut – trust us, they’re either not effective enough or there are too many unwanted side effects.

Laser tattoo removal is the only show in town when it comes to effectively getting rid of your unwanted tattoo.

So finally, let’s get around to your important question, because you’re not being a wimp for asking it: does laser tattoo removal hurt?

We’re not going to lie and say their isn’t any pain during laser tattoo removal. But the real answer is probably not as much as you’re imagining. Ultimately, because pain is completely subjective, what “really hurts” to one person might not be a big deal at all to another.

It is also important to weigh up the short-term discomfort against the long-term outcome. Laser tattoo removal is really effective at getting rid of that ink mark on your skin.

Many people believe that laser tattoo removal is nothing short of “excruciating” – and you may have even heard that word being mentioned.

However, the truth is that most people who undergo laser tattoo removal actually report that getting it removed hurts about the same as it did to get it put on. Of course, just like getting ‘inked’, more sensitive areas like ribs, neck or the inside of our arm will hurt more. So if you can bear the pain of permanently marking yourself, you can bear the pain of permanently ‘unmarking’ yourself! 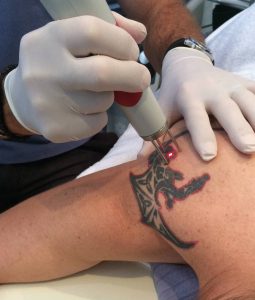 As is the case for anything subjective, it can be hard to answer exactly how much laser tattoo removal hurts. Some say it’s a bit like putting a rubber band on your wrist or ankle, pulling it back and feeling that ‘snap’, and then doing it again and again. Others report that it’s a bit like standing too close to the spitting fat while you’re frying bacon. In other words, exclaiming ‘ow!’ wouldn’t be out of place, but it’s not bad enough that it should put you off the idea. In short, it is painful but bearable.

The other thing to note is that the laser tattoo removal process is also fast – much faster than it took to actually get the tattoo applied in the first place.

Is there anything to help with tattoo removal pain?

A quality laser tattoo removal practitioner not only sympathises with the level of pain involved, but will do something to help you through it. We actually ask and document tattoo removal pain! Clients who have previously had tattoo removal elsewhere, typically reported tattoo removal pain as 6-7/10. Using a low level laser pre-treatment this was reduced to a more bearable 5/10. Low Level Laser Therapy (LLLT) is a healing laser that reduces pain and swelling, thereby reducing down time.  The antibacterial blue light also reduces the chance of infections. This is a patent pending technology devised by our senior clinician.

Numbing creams can further reduce the pain scale by a couple of notches. A visit to your GP for a prescription numbing cream can have a massive reduction, depending on the level of active ingredients such as lidocaine. Our data shows some reporting tattoo removal pain as low as 2/10, but consult with your tattoo removal specialist and doctor first!

After care will help with healing and post tattoo removal pain decreasing the common itchiness experienced to a virtually non-existent level as well as reducing swelling and blistering. Even simple techniques like ice and topical creams can be useful, particularly if the tattoo is small.

In summary, if you’ve heard some reports about the “excruciating” nature of laser tattoo removal, one of these factors may have been involved:

So if you were brave enough to get that tattoo in the first place, you’re most certainly brave enough for the faster, less invasive and extremely effective process of having it removed. With the very latest in state of the art laser technology, having your tattoo removed won’t hurt as much as you may think.