The Science Behind Tattoo Addiction- Is it a Reality or Fallacy?

Home » Blog » The Science Behind Tattoo Addiction- Is it a Reality or Fallacy?

Many people who have tattoos would generally agree that once they had one, it was hard to stop. With the rapid increase in popularity of tattoos over the last two decades, the number of tattoo parlours has grown as well as their repeat visitors. Statistics tell us that 1 in 4 people in Australia have tattoos, but are tattoos addictive?

Humans have been tattooing their skin for thousands of years. Otzi, a 5000 year old European mummy was found to have over 50 tattoo markings over his body. A tattoo can be cultural, a remembrance, a constant reminder of a thought process, a prayer, religious, or simply a work of art. The reasons behind a tattoo can be very personal, spiritual, tribal, decorative or whimsical.

Is it actually tattoo addiction that drives an urge for further body modifications?  Our biochemistry might hold some of the answers.

Some have blamed dopamine for tattoo addiction. Often called the sex, drugs and Rock-n-Roll neurotransmitter or the love and motivation molecule, Dopamine is essential for frontal lobe function of the brain, the decision maker. Full frontal lobe development does not occur until you are 25 years old. This might explain why we get so many clients who have had tattoos before this age and now regret them! So, what has dopamine got to do with it all?

Technology companies and Gaming developers create platforms that cause dopamine responses, a little hit that churns a compulsion loop. Sean Parker, founding president of Facebook, who resigned in 2005 explained that “Whenever someone likes or comments on a post or photograph, he said, “we… give you a little dopamine hit”. Time and attention on these various platforms equates to greater dopamine release. The success of these companies plays on the “vulnerability in human psychology”, creating an action to feed a need or desire, a reward-motivated behaviour. Dopamine is the one that if you are thirsty, you know to get a glass of water. A couple of neuroscientists in the U.S.A have even begun a company called Dopamine Labs that create apps that hook users.  Now, these labs, maybe out of conscience (?) are also developing response systems that are able to help kick the habit. As low dopamine can cause a feeling of worthlessness, those little pings of response in certain apps can make someone feel a bit better about themselves.

Sometimes called the happy chemical, it is responsible for the regulation of mood, sleep and social behaviour. As serotonin is mostly found in the gastrointestinal tract, bad food choices and gut disturbances could affect its production. The symptoms of low serotonin levels are thought to cause depression, low self-esteem, aggression and poor memory.

Huffington Posts article Hacking into Your Happy Chemicals states that “Serotonin flows when you feel significant or important. Loneliness and depression appears when serotonin is absent. Maybe for some, a tattoo is an attention-seeking behaviour or to  help with low self-esteem, making someone feel better about themselves.

So, you are heading to the tattooist and there is a surge of adrenaline from your Sympathetic Nervous System creating a “fight flight response” in anticipation (pumped up and ready for action or ready to run). The body’s brilliant reaction to help cope with the pain and discomfort of the tattooing procedure can be a mild feeling of euphoria from an endorphin release. It is important to note that endorphin release does vary amongst individuals. Endorphins are your natural pain and stress relievers. They interact with opiate receptors in the brain. Endorphins are secreted following intense exercise, massage, and acupuncture amongst other treatments.  Many of you may know friends who are “addicted” to exercise due to the endorphin release it gives to them. Laughter will also increase endorphins. With high endorphin levels, we feel less pain and fewer negative effects of stress.

If we are to talk about tattoo addiction, we need to understand or define “addiction” itself. According to MentalHelp.net, the definition of addiction is “the repeated involvement with a substance or activity, despite the substantial harm it now causes, because that involvement was (and may continue to be) pleasurable and/or valuable”.

Having conducted many studies, a University of Westminster psychologist, Viren Swami dismisses addiction or dependence to tattoos. “I think that the short answer is that we don’t know. We don’t know whether it’s a real thing or not. And most people who study it suggest that it’s too early in terms of the research where tattoos specifically are a form of addiction.”

Actually craving endorphin release is said to be pretty rare, according to Neuroscientist David Linden, and the glow of release is too short lived to be considered as a main driver to return to tattoo parlours. In many cases, people simply want tattoos for purely aesthetic reasons. If the core motivation is something beautiful on the body, then thinking about and planning of the tattoo/s, experiencing the entire treatment process as well as the anticipation of the final result is very exciting. A creative personal branding is not an addictive behaviour. It is just a way of self-expression.

For some it is an urge to feel unique. If the tattoo is done for attention and approval from others, then once the novelty has worn off, further modifications are likely, one tattoo followed by another and another.

A small study done from Liverpool Hope University found that people who had three or more tattoos were likely to have low self-esteem.Out of the 48 people in this study, the four motivational factors were to be rebellious, to belong to a group, aesthetics and strong emotional attachments.

One completely tattooed man was so strongly driven by aesthetic appearance that he had some of his genitals removed. This could be considered as addictive behaviour as it does negatively affect his life. This is not too dissimilar to this gentleman that has also had his eyeballs tattooed.  Another man, a confessed attention seeker has obsessive compulsive disorder (OCD), another biochemical hiccup involving a deficiency most likely of the GABA neurotransmitter which has predisposed him to his addictive behaviour.

Body modifications, in the majority of cases, aren’t addictive. If you feel an overwhelming urge to get many body modifications, and it’s negatively affecting your life, whether financial or for health reasons, you may be exhibiting addictive behaviour.

Fortunately, for those with tattoo regrets, there have been dramatic advances in tattoo removal science. There is very little down time, and the results are astounding. For more information on our technology, come and see us for a free consultation.

For those of you who have found this information confronting, please contact Lifeline on 13 11 14 or visit your preferred Health Care Provider for advice.

Oxytocin, the cuddle molecule. One of our favourites. 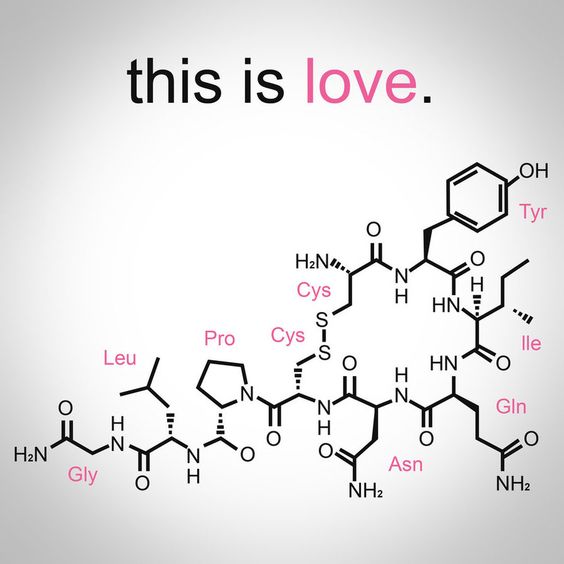